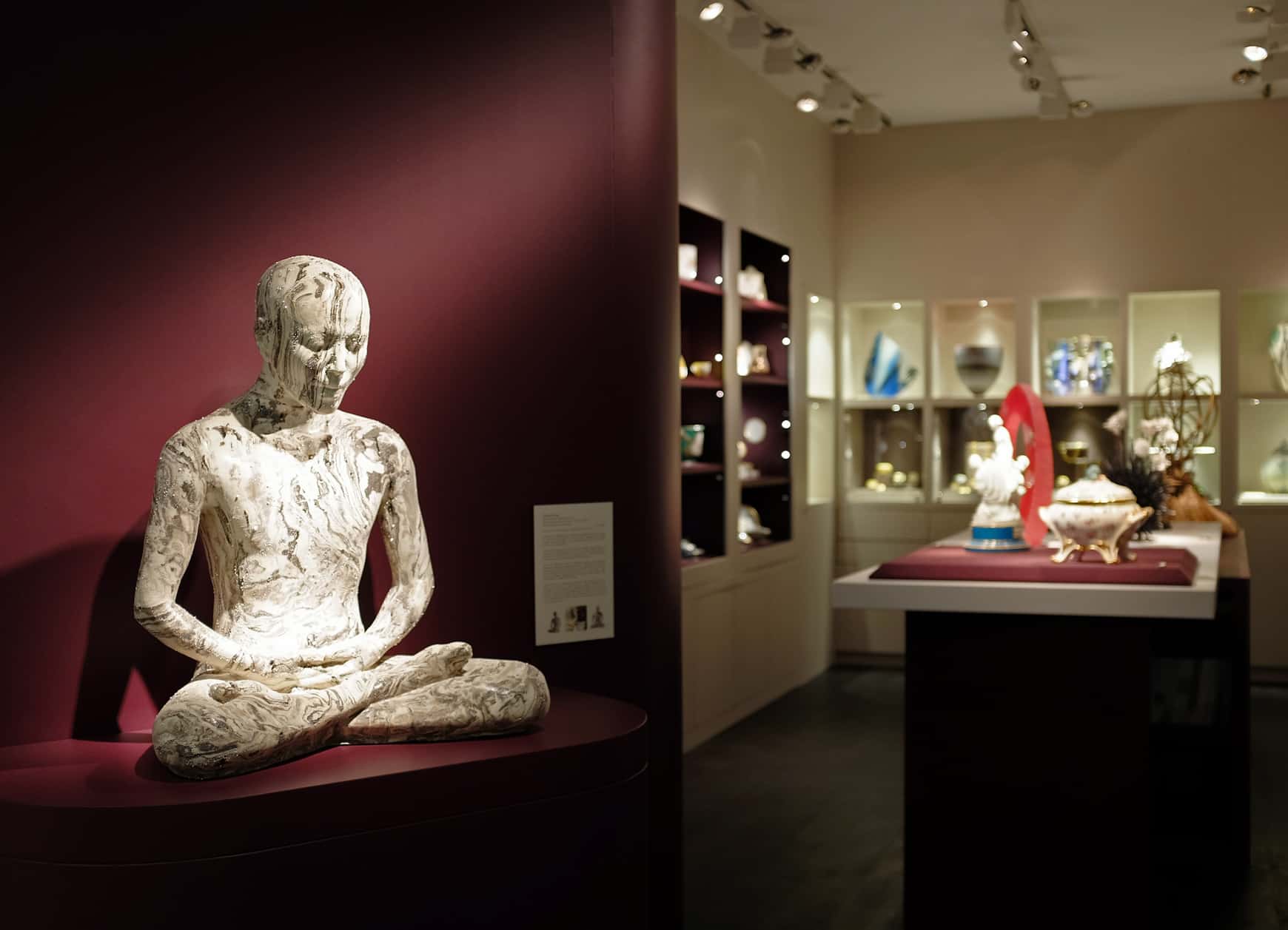 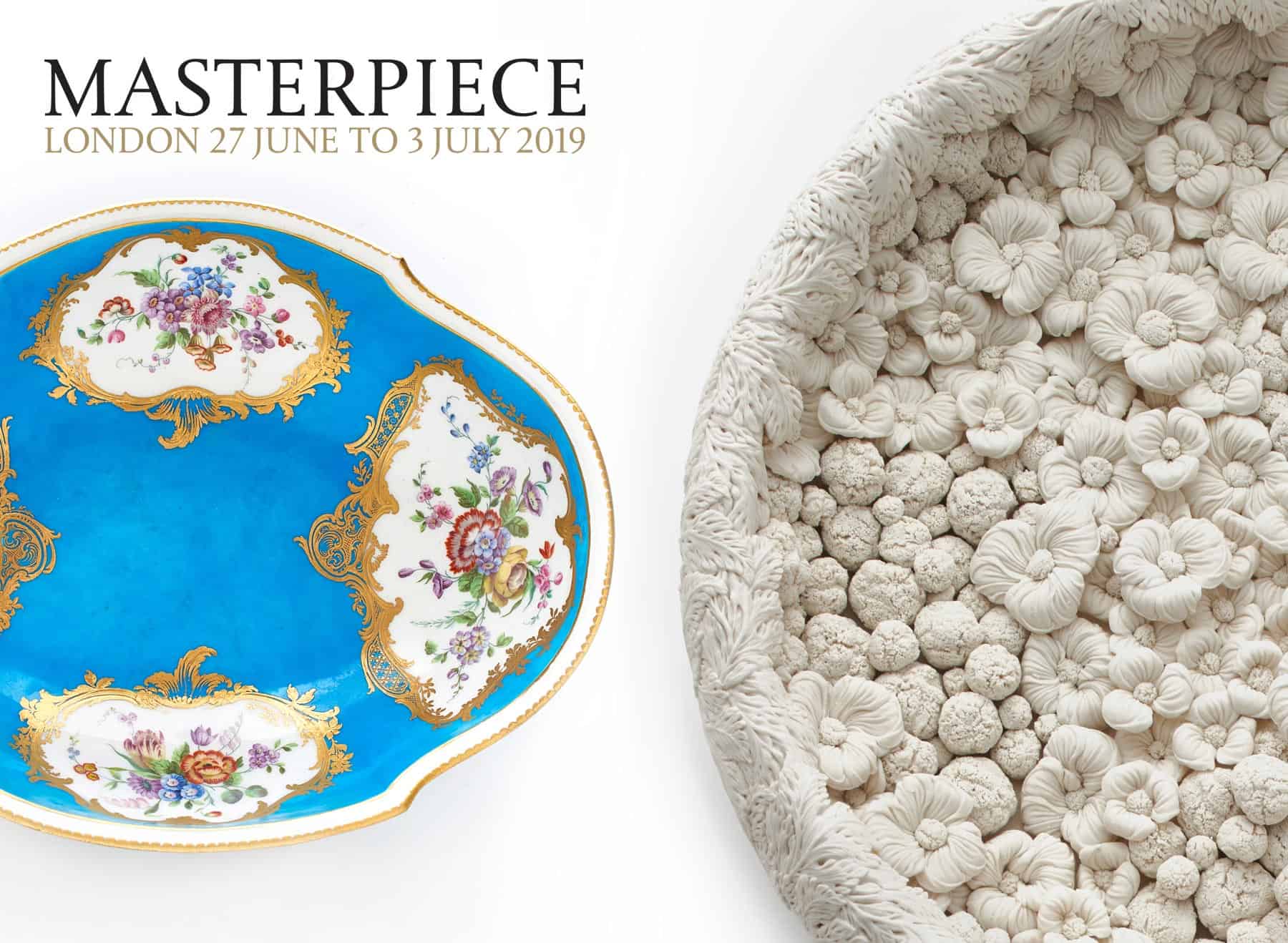 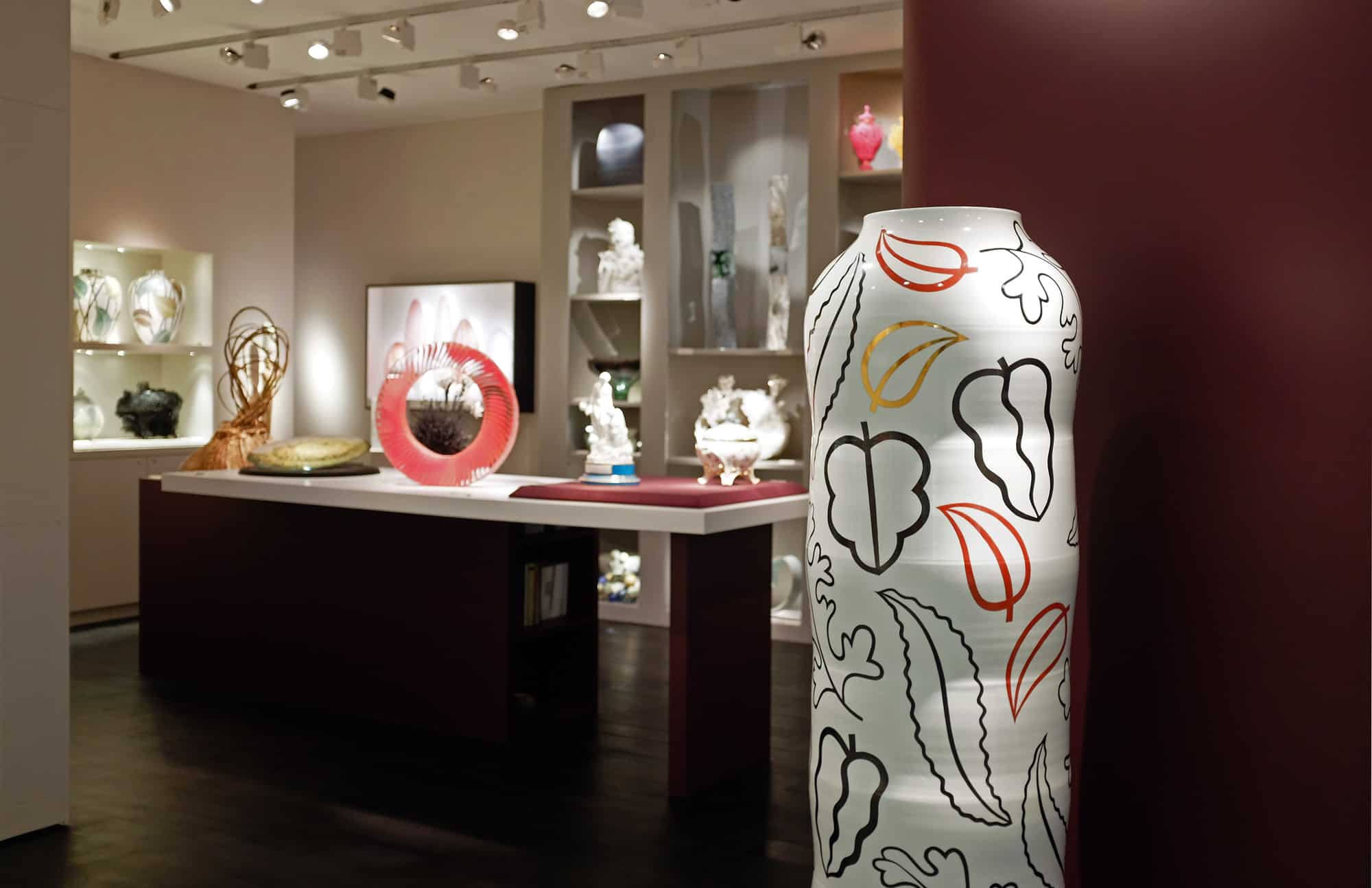 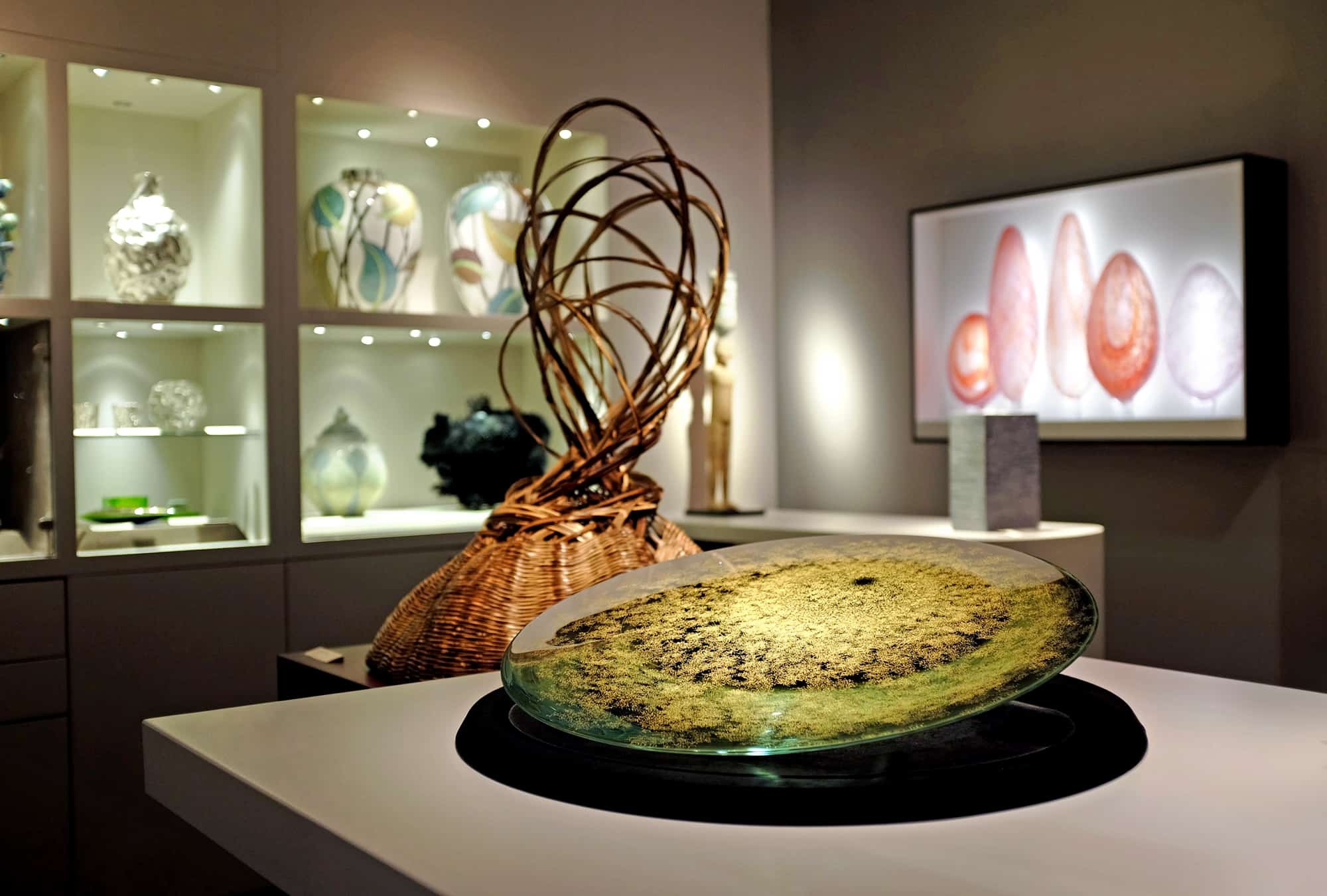 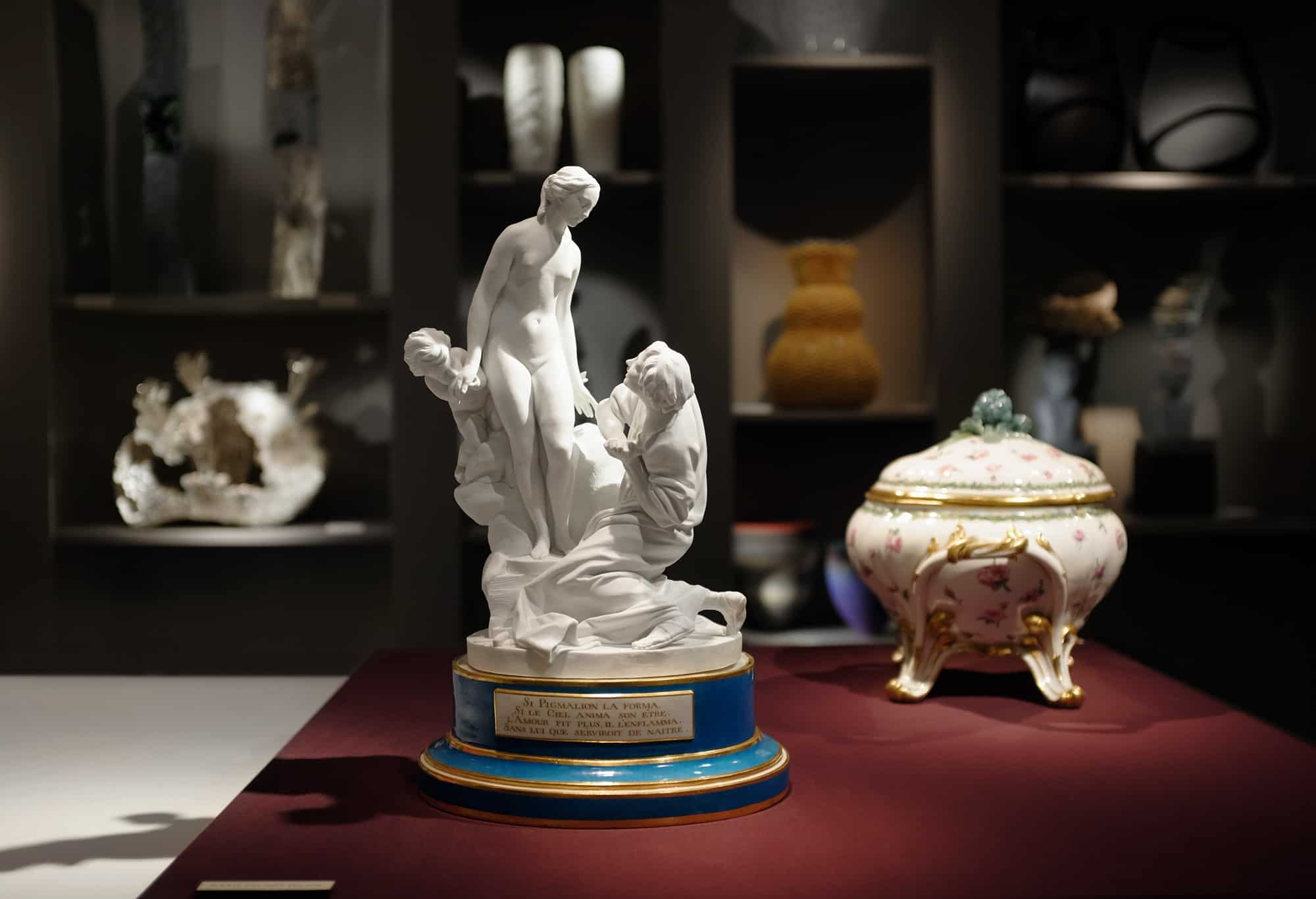 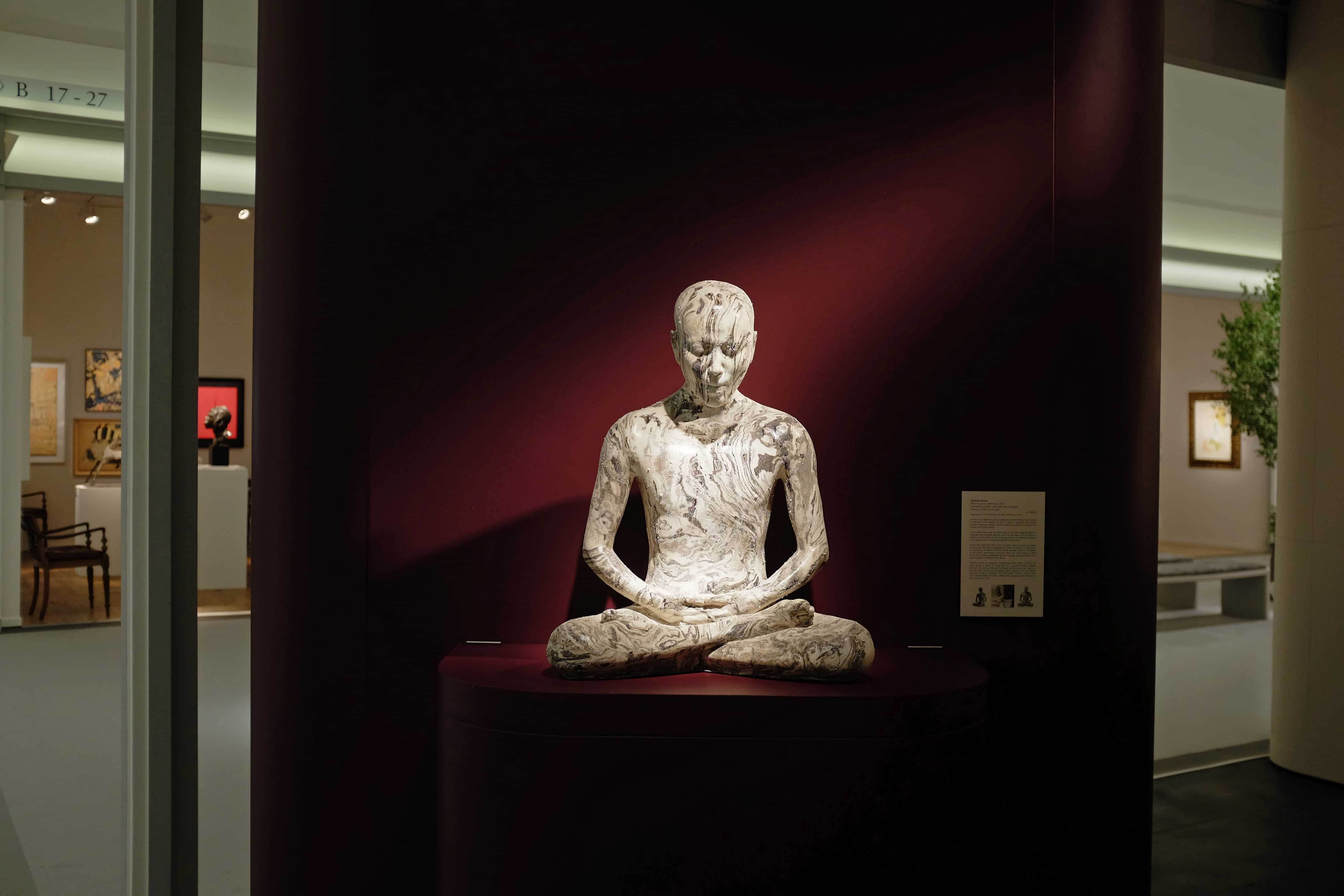 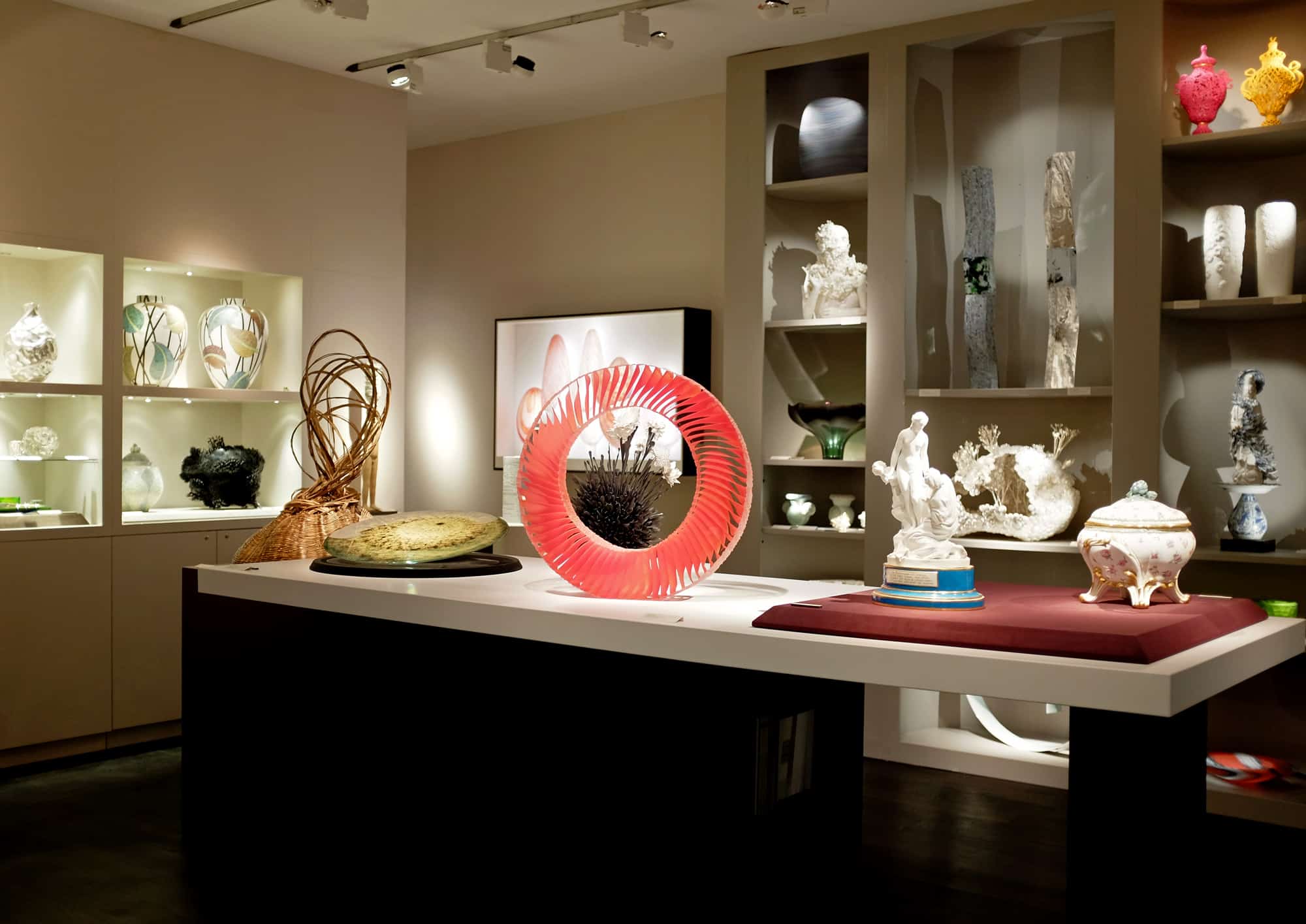 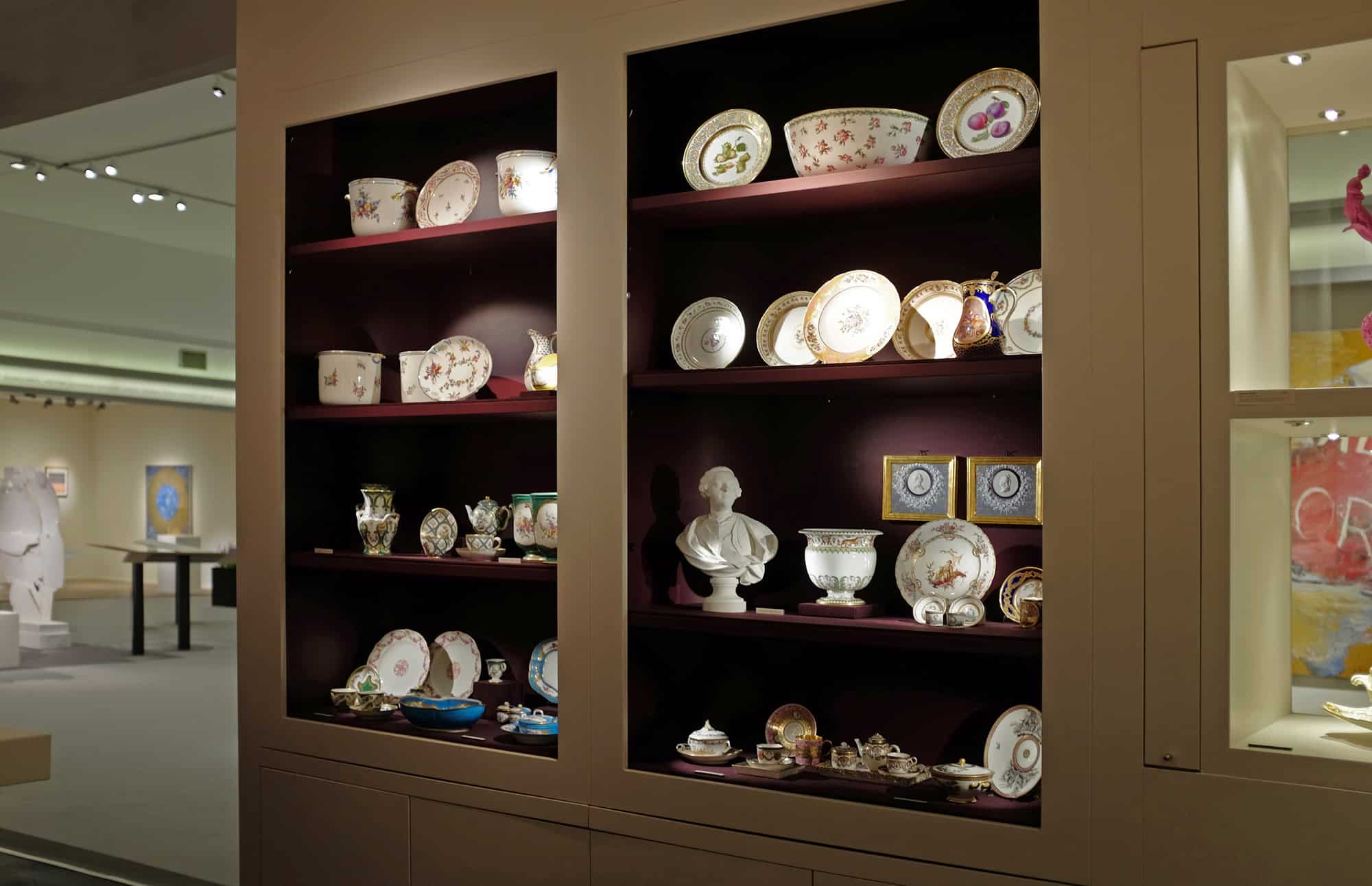 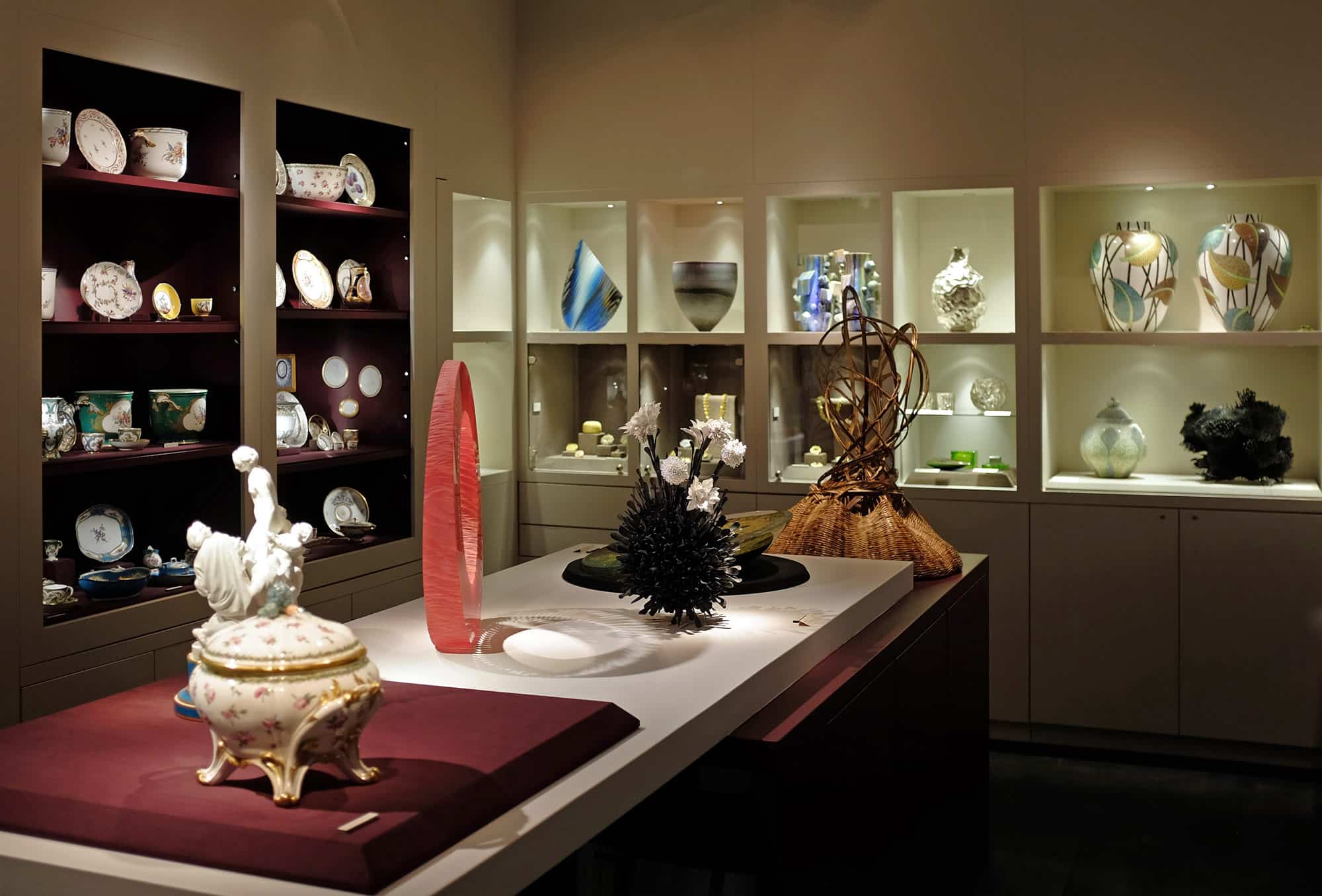 We are excited to be returning to Masterpiece this year. At this fair we exhibit contemporary works alongside 18th Century French porcelain.

Hitomi Hosono will be showing a completely a new body of her work inspired by Manga. Memory of Sakura is a vessel that draws inspiration from Cherry Blossom, ‘Sakura’ and the philosophy, novels and poetry written about these beautiful flowers that adorn Japan. She has two groups of Manga work in the British Museum’s show titled Manga at the moment. She will also be showing a selection of moulded, carved and hand-built porcelain vases and sculptures that are made from white porcelain that are incredibly intricate. Hitomi will be speaking at the fair as a part of the talk program at 3pm on the 3rd of July with Professor Nicole Coolidge Roussmaniere (IFAC curator on Japanese Arts in the British Museum and Research Director Sainsbury Institute, UEA)

Kate Malone A Woven Honey Basket: This magnificent undulating vase stands proud at 53cm. Imitating basketry is a technique developed after her solo show at Waddesdon Manor in 2016 where she started looking closely at passementerie and exploring the possibility of imitating weaving effects through clay.

Junko Mori Propagation Project; Surf Conch: made completely of forged mild steel, 60kgs of steel flows effortlessly around and into itself. She has also created a fine silver organism with gold tips – she recently developed this technique and this is the first time that she is showing such a work. Mori is a Loewe craft prize finalist and these work displays how she currently moving from strength to strength.

Chime Watanabe: Time and Engraved Seed – this stunning layered, engraved and carved glass piece is inlaid with gold leaf. We are very excited to be showing this artists’s work for the first time.

Akane Yamamoto: Leaf Boat – Yamamoto works using the traditional technique of kirikane where gold leaf is layered up and sealed within glass in the kiln. It is painstaking work and the results are spectacular.

Major pieces of Louis XVI’s Arabesque Service are incredibly rare It is one of four large size Wine Coolers made for the service. This example for sale now came directly from one of the descendants of the Prussian foreign minister, Count Hardenberg, who was given the service in 1795 and it is one of the last pieces the family had left from the few they rescued in 1945.

A Sèvres Group depicting Pygmalion on a bleu céleste base, c.1780

This animated scene made in biscuit porcelain depicts the kneeling sculptor (Pygmalion) amazed as his model (Galatea) comes to life while a putto is kissing her right hand and another points an arrow at Pygmalion. The composition this is based upon was by Falconet and was exhibited in 1763.

Click here to see a catalogue of some highlight pieces: 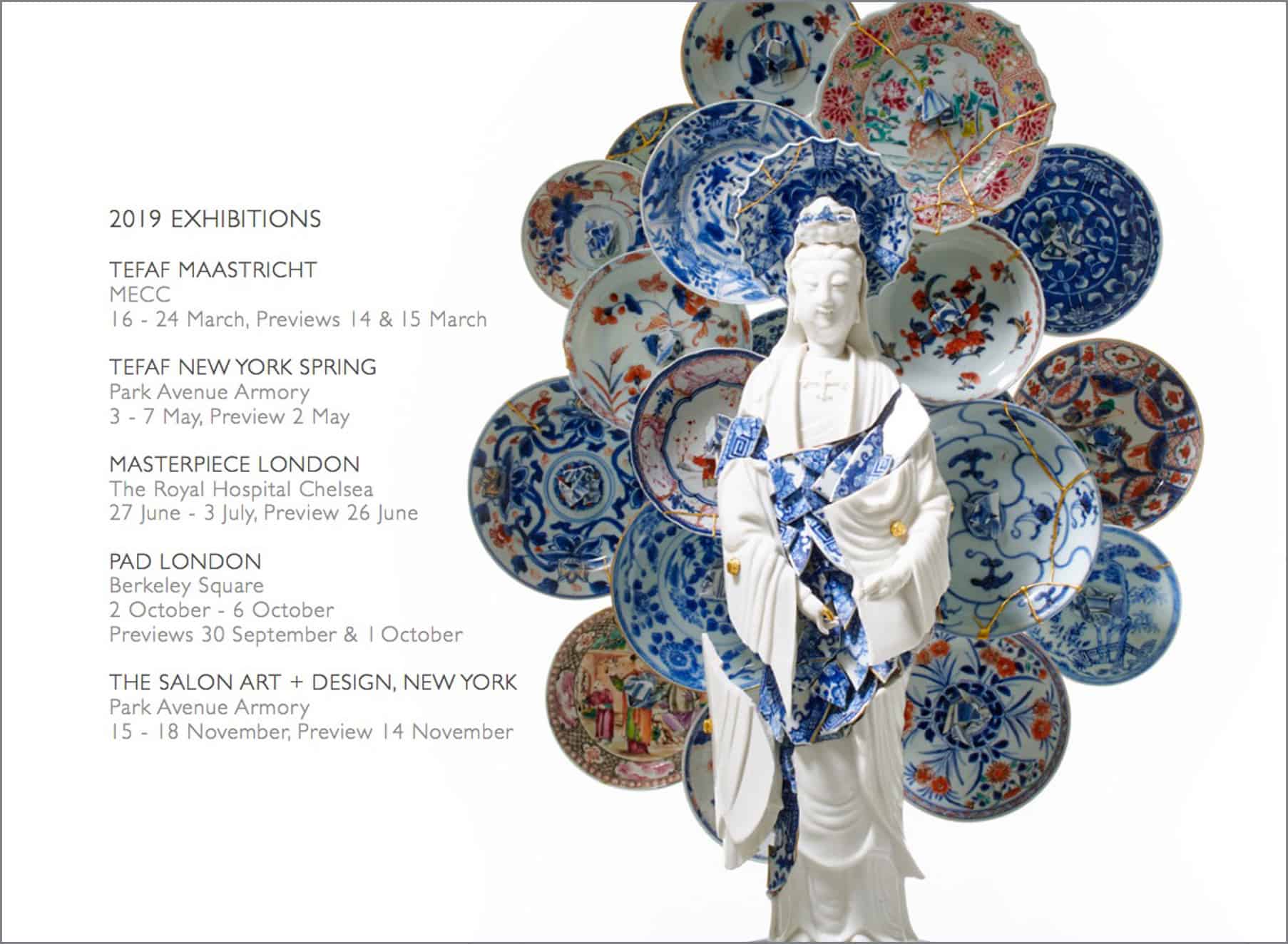 We will be exhibiting works of art at five art fairs this year: two in London, two in New York and one in Maastricht.