In 1783 King Louis XVI commissioned an especially novel dinner service from the Sèvres porcelain factory, partly made of soft-paste and partly of hard-paste porcelain, with the architect Louis Le Masson designing new neo-classical shapes and the painted decoration based on Raphael’s decoration of the Vatican in Rome.  Unlike most Sèvres dinner services of the previous thirty years it did not have panels of a ground colour.

The service was being produced from 1783 until 1787 by which time over 100 pieces were completed.  This is one of four matching seaux à demi-bouteilles arabesque made, holders for glass wine decanters to be in iced water.  One other example survives, fairly damaged, in the Musée des Arts Décoratifs, Paris.  The painter’s mark on this piece for P.-A. Méreaud links to the Sèvres factory’s archives which record him as completing the painting of this piece on 14th February 1785.  We believe he painted the foliate and arabesque decoration and from the archives that the porcelain painted E.-H. Le Guay painted the animal and figurative elements.

In 1795, after the French Revolution, the government presented this royal service to Prince Karl August von Hardenberg, Minister of State to the King of Prussia.  The service remained with the Hardenberg family at their Schloss outside Berlin until in 1945 when a few pieces including this were removed by the family whilst the majority was destroyed with the house by the Russian army.  This piece remained with the Hardenberg family until recently and is one of the last pieces of this service in private ownership.  Adrian Sassoon has sold pieces from this service to The Metropolitan Museum of Art, New York (a plate), to the Philadelphia Museum of Art (a dish), and to the Houston Museum of Fine Arts (a plate), USA.  The Art Institute of Chicago, and the Victoria & Albert Museum, London each have one plate in their collections. 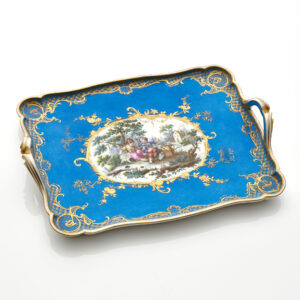